My class was taking a field trip to The Original Teddy Bear Factory. Nowadays they have those commercial “Build-A-Bear” stores, but this was the ORIGINAL Teddy Bear Factory in San Francisco where everything was hand-sewn and customized by a seamstress, just for you.

My sis had the same teacher in 3rd grade. She had gone on this field trip before so I heard about all the magic at The Teddy Bear Factory. I had been anticipating this all year. 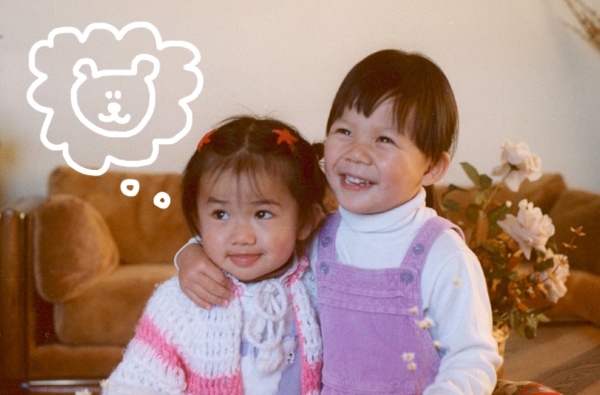 My mom dropped me off at school. Wearing a boxy fluorescent backpack, I took less than 10 steps when I realized that I forgot to ask her for money so that I could buy a teddy bear. My heart dropped.

I ran after my mom’s car with the same desperation that people in movies run after cars. She didn’t see me and kept driving. I slowed to a stop and burst into tears.

I went into class and put my head down on my desk. Mrs. Garber saw and brought me outside. She looked concerned and asked what happened. Through sniffles, hyperventilating, and choking, I said, “I forgot to ask my mom for money… so I won’t be able to get a bear from The Teddy Bear factory.”

By how I was crying, you would have thought there was a death in the family. I bet Mrs. Garber was tempted to laugh but instead she said, “How about this – I will lend you $20 and you can pay me back tomorrow.” I said ok.

The Teddy Bear Factory was all that it was hyped up to be. I chose a bear named Rusty and went through the assembly line as old Chinese ladies sewed on his body parts. The last was his black pom pom nose. I said “Thank you” to the lady in Cantonese and brought home my new favorite stuffed animal.

Money isn’t important to some people but this is when I learned that I like having it. I’m not a luxurious person who must stay at 5-star hotels and wear designer clothing but I do like the option to do cool things, like buy a bear from the Teddy Bear Factory, dammit.

Passion Is Not Enough: How To Build a Strong Foundation In Your Business and Your Life

The One Emotional Trait To Make Life Easier

The 5 Love Languages: A Book That Will Elevate All of Your Relationships