Kindergarten. 1986. It was my first Halloween. I was excited to dress up because I had the BEST COSTUME EVER – Minnie Mouse.

Looking back, it was more like a costume a kidnapper would wear. 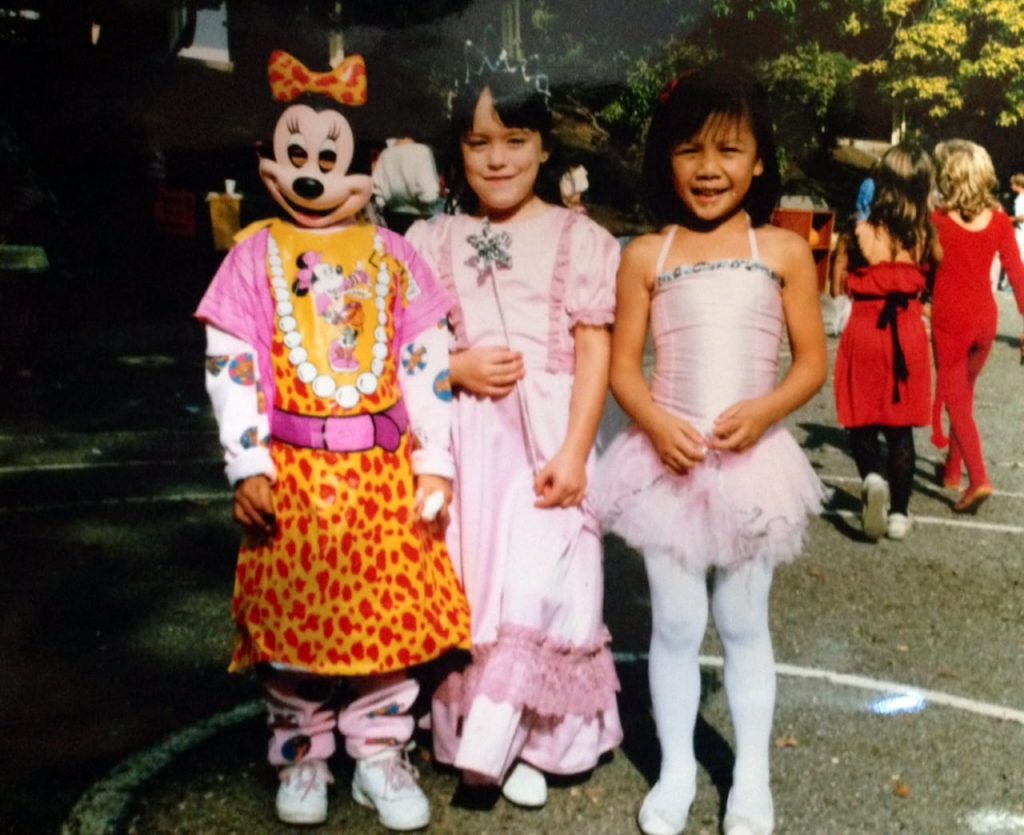 Each year during Halloween the school had a parade. We as the kindergarteners would start the parade by marching through classrooms in our costumes. I couldn’t wait to show mine off!

She picked me. I was given an apron and led to the back room to paint paper plates blue for tomorrow’s arts and crafts project. Newspapers were laid out. There was a stack of Dixie paper plates and a bottle of blue tempera paint. I felt so special. The teacher trusted me to do this special task while everyone else was doing the same daily activities. Muahaha.

After a while I heard Mrs. White say, “Ok, now it’s time to put on our costumes for… the HALLOWEEN PARADE!” The class cheered. While everyone put on their costumes, I waited for someone to get me. They know I’m back here. Minutes went by. They wouldn’t forget about me, would they? I was ridiculously shy, so continued painting.

The lights turned off. Panic. I heard my classmates marching out the door.

I didn’t want to go out there and say something, but then I imagined sitting in the room alone crying in the dark while everyone else was enjoying the magical parade. Who’s fault would that be? Mine for not speaking up! At the last possible second I mustered up some courage and peeked into the main classroom.

The TA was the last to leave, about to step foot out the door. I tapped her on the back and started crying the moment she turned around. She said, “Oh my gosh, we forgot one!”

She told the class to go ahead and stayed to help put on my costume. I put the mask on. Teary lashes touched the rim of the eye cut outs. We ran, caught up with the rest of the kids, and I joined the end of the line to march in my first Halloween parade.

As we marched through the 5th grade class, two girls (they looked really cool, by the way) yelled excitedly, “It’s Minnie Mouse!.” I smiled behind my molester-looking mask. See, I DO have the best costume!

Sometimes, even now, I have hesitation to speak up for myself but this lesson taught me that sometimes people forget or they simply don’t know. It’s your job to tell them. 🙂

Travel Photography: Alaska To The Yukon

No, You Won’t Be an Overnight Success: Here’s Why (And Why It’s Okay!)